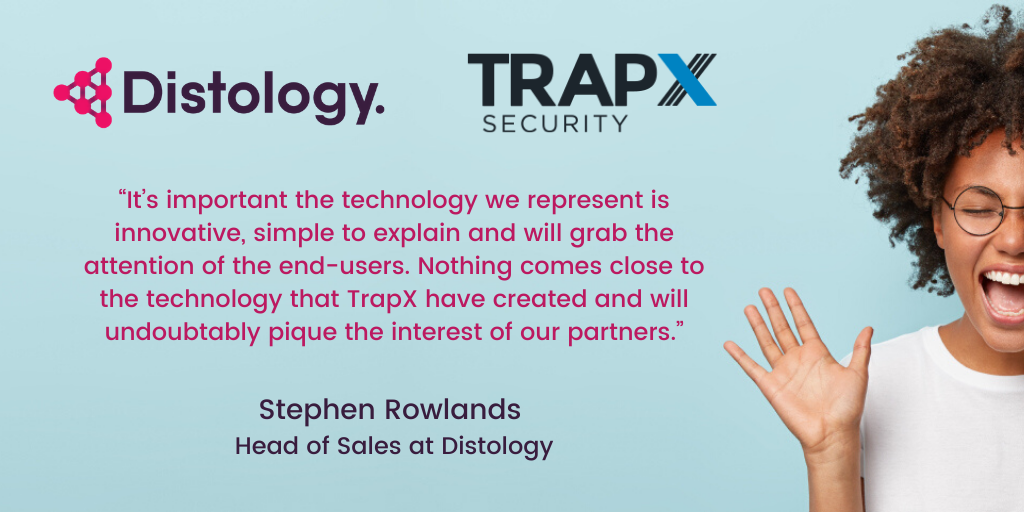 IT security software distributors Distology have launched a brand new partnership with cyber deception leader TrapX Security, in the UK.

TrapX Security has been recognised as the leader in cyber deception technology. In August 2019 they were awarded five out of five stars by SC Magazine on features, documentation, value for money, performance, support and ease of use. Incredibly, the publication listed zero weaknesses for the technology.

In September 2019, TrapX was announced as the winner of Security Shark Tank® New York City 2019 as voted for by a panel of CISO’s from bluechip companies such as Sony, Sotheby’s and Salesforce. TrapX was specifically recognised for its ease of use and importance to business.

Steve Rowlands, Head of Sales for Distology commented on the announcement:

“When we’re entering into partnership with a new vendor, it’s important the technology they are delivering is innovative, simple to explain and will grab the attention of the end-users. Nothing comes close to the technology that TrapX have created and will undoubtably pique the interest of our partners.”

“During the initial conversations with the TrapX team, we were particularly impressed by the use cases, it’s ease of deployment, the scalability of the solution and the fact that many large global customers like Procter & Gamble have decided TrapX is the best fit for their needs.”

The deception market is undergoing significant growth, especially as security and risk leaders in enterprises are seeing a return on investment by improving their threat detection and response (TDR) with a scalable, non-intrusive solution for IT, Legacy, OT and IoT environments.

“Distology’s network and its end-customer relationships make them the perfect match to help accelerate our solution to market.”

The partnership between Distology and TrapX will enable channel expansion into the UK and Northern European market for the deception software innovators.

“Our partners will now be able to provide their customers with a new approach to reducing enterprises business risk by deploying in IT, Legacy, OT and IoT environments at scale, quickly and without impact on the business, ensuring high fidelity breach protection.”

For more information about Distology or TrapX, please contact the team via [email protected] or 0161 914 7798.

If you weren’t able to make it to Disruptor Day and wonder whether the venue was up to scratch, who turned up and whether the networking was worthwhile then feast your eyes on the gallery below! You can find out even more by listening to the Delve podcast featuring Richard Searle, Eyal Benishti, Almog Apirion END_OF_DOCUMENT_TOKEN_TO_BE_REPLACED

Distology Take Home Three Awards in One Week! It’s been such an amazing seven days that it’s difficult to know where to start! Actually, we do! It started on the 9th November in San Francisco when we were named Okta’s EMEA Distributor of the Year at Oktane22! Zeta Stephenson and Rob Darby of Distology at END_OF_DOCUMENT_TOKEN_TO_BE_REPLACED

Distology are delighted to welcome the brilliant Squareball team to our family. Based in Berlin, Germany, Squareball extends our base of operations further into Europe and the team are already off to a flying start working with two core vendors, Okta and Auth0. Squareball augment our existing expertise with their recognised excellence in software engineering, END_OF_DOCUMENT_TOKEN_TO_BE_REPLACED

Stay up to date with the latest news, events, webinars and technology! You can unsubscribe at any time.